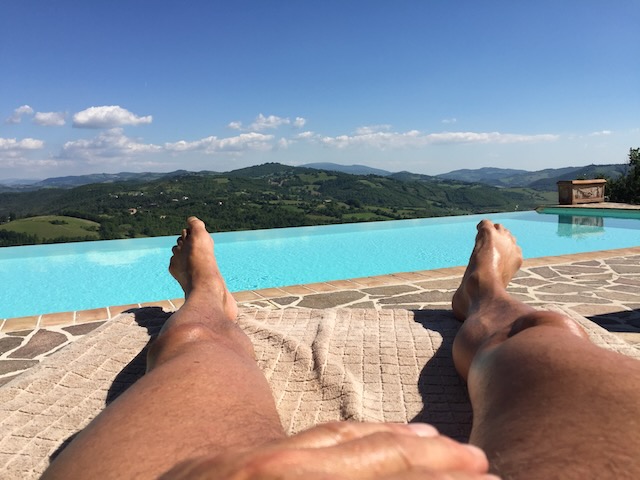 Is it time to show all?

Just a quickie post this evening prompted by a conversation at a recent dinner here at Bellaugello.

Since starting my blog I featured guys in our infinity pool at Bellaugello Gay Guest House.  A way of including guests in the history of the guesthouse.

The idea being that these photos, except for those guys with obvious tattoos were completely anonymous.   The posts started out as “Bellaugello Backs” just a shot of the back of a head and a bare back out of the water.  Check the archive..  One sunny day a guy from the north of Italy changed all that when he asked to be photographed with his butt out of the water.  Soon other guys asked to be similarly photographed.  I had to oblige.  Thus the series became called “Bellaugello Backs and Butts”, it was and is very popular.

I kind of like that series as you can show the art and holiday snaps to your mother, bank manager or even the neighbours.  Bare butts seem socially acceptable.

The question at dinner arose, should I now be posting full frontal photos, and If not, why not.  Should photos such as the caption pic be without the hand?  Should a pic of a guy under the outdoor shower be ‘less prudish’?  Should pics of  guys in the Jacuzzi or pool be more revealing?   Faces could maybe be blurred out? Come on, after all, full frontal nudity is now seen in mainstream movies, on stage and even occasionally on tv, so why not on a blog.

Would you like to be part of such a series of photographs, or would you stop being a follower of my blog?

I’m keen to learn your thoughts and reasonings, so, please do leave a comment.

Manage Cookie Consent
To provide the best experiences, we use technologies like cookies to store and/or access device information. Consenting to these technologies will allow us to process data such as browsing behavior or unique IDs on this site. Not consenting or withdrawing consent, may adversely affect certain features and functions.
Manage options Manage services Manage vendors Read more about these purposes
View preferences
{title} {title} {title}

A loaf of Umbrian white bread

A bottle of balsamic vinegar

200g Umbrian prosciutto from our butcher

Pack of salad leaves or lettuce from the garden

A selection of vegetables from the market or our garden

A selection of fruit in season

A bar of chocolate